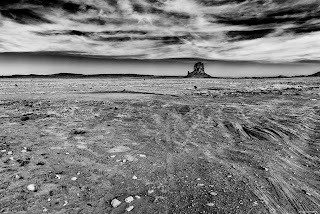 My first fine printing class was with George Tice at what today is called the Maine Media Workshops.  George taught the exquisite application of the basics.  There was no special paper, developer, or process that resulted in the "George Tice" image, look, or feel.  Every image stood on its own and was treated as if no other images existed with which it had to go.  Every image deserved to be interpreted in the manner that was optimal for that image.  To my knowledge, George never articulated this philosophy.  It just seemed to me to be the way he approached every image.

That philosophy of treating every image as an individual has stayed with me throughout my photographic life.  I have always felt that every print of an image should be the treatment that best suits that image.  What this means is that over time, my opinion of what an image ought to look like may change.  I have new craft skills and materials.  As an artist, why should I not take advantage of these changes?

One of the most interesting shows I've seen was a retrospective of Ansel Adam's work where several prints of the same image were shown side by side.  One might have been made early in his career, another mid-career, and the final shortly before his death.  There is no question in my mind that he got better over time and/or reinterpreted his negatives.  He did say that the negative was the score and the print was the performance.  And, just like the conductor of a symphony who may reinterpret a symphony over time, he had the right to reinterpret his negatives as he saw fit.

I am always struck by the absurdity of dealers who value early prints as "more closely representing what was in the photographer's mind at the time he took the image."  It may take me years to realize the image that I really want.  The early versions are nothing more than the best I could do at the time.  They are almost a sketch of what I may render in the future.  It may take me years to realize the potential of an image.  What this tells me is that most dealers have never been serious photographers.

It also tells me that dealers have been successful in convincing collectors that early prints are more valuable than later prints, in spite of how we, as photographers, feel about our work.
Posted by Jim Steele at 4:23 PM No comments: Links to this post 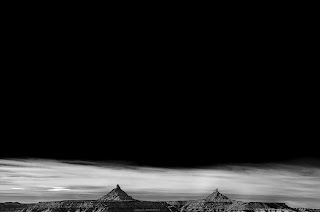 The above image has absolutely nothing to do with the subject.  I just liked it....  I guess if it had a full moon in it I could title it Moonrise Over Monument Valley (Homage to Ansel)

Chuck Close, who in addition to being one of the great artists of our times has also become one of the best philosophers of our time, recently said something to the effect that inspiration is for amateurs, the rest of us just show up.  I am often struck at the amount of work it takes to create an image that satisfies me.  In the manner that some images are too easy to read, I think there is also something to images that are too easy to create.  Hard work on an image does not create a great image, but hard work on an image often leads to a flow of the creative juices that, potentially, can lead to a great image.  Sometimes it's a different image, but I have found that the harder I work the more images I find that interest me.  Maybe there is a connection...........
Posted by Jim Steele at 5:43 PM No comments: Links to this post 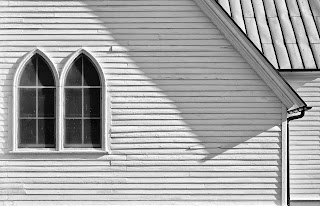 I'm taking a History of Photography course at Northern Virginia Community College and we'd recently been looking at some of the work of Paul Strand.

I was in Richmond, Virginia the other day to see an exhibit of glass by Dale Chihuly.  It was a fabulous exhibit and well worth the trip.  Besides, the cafeteria there has really good barbecue!

On the grounds of the Virgina Museum of Fine Art is the Confederate Memorial Church.  As I was leaving the museum I drove by the church and noticed the wonderful shadow of the roof and the texture of the wood brought out by the angle of the sun.  I guess I was channeling Paul Strand because I immediately thought of some of his images.

I commented to my wife that I wanted to come back sometime and photograph the church.  She pointed out to me that there was a parking space right on the street and asked what I was waiting for.  To wit, this is the result.
Posted by Jim Steele at 12:20 PM 2 comments: Links to this post