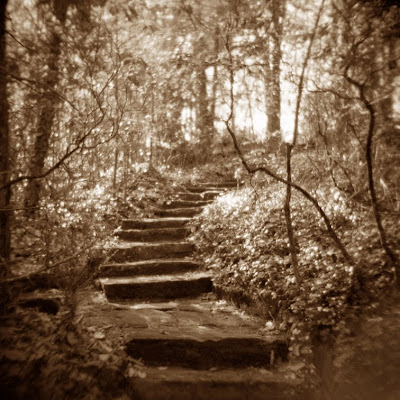 "Toward the Amphitheater"
Rob McDonald
Every now and then we are blessed with really wonderful photography by someone who understands the difference between tools and vision. Such an exhibit is the show currently at the Athenaeum in Alexandria by Rob McDonald, Native Ground.

The above image, "Toward the Amphitheater" from Lillian Smith's home - a camp for girls that she ran with her partner, Paula Snelling in Clayton Georgia is one of many of the exquisite images in the show

These beautiful images are created using very simple, and to some degree primitive photographic tools to express a very sophisticated vision. The images are almost like memories, sufficiently defined to know what they are but not so sharp as to reveal every detail. They leave something for the viewer to interpret. That ambiguity is one of the qualities that make them so compelling.

Go see it!
Posted by Jim Steele at 10:25 AM No comments: Links to this post 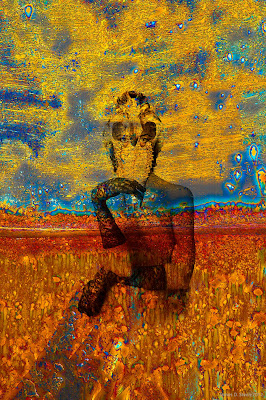 I read a great quote from Books Jensen, the editor and publisher of Lenswork, "A good fine art photograph is one that makes the viewer so aware of the emotional content that the viewer is unaware of the print." I might generalize this beyond photography but I think it really is a great definition.
Posted by Jim Steele at 1:28 PM No comments: Links to this post

The Mall as Rembrandt might have photographed it.
Several months ago I taught a workshop on techniques one could use when converting a digital color image to black and white. However, as I got into the workshop, what I discovered was that the students were really interested in how I looked at a raw (not RAW as in format) image and decided what to do with it visually to make it into "fine art."

This got me thinking about the old saying that, "if I own a piano I am a person who owns a piano, but it I own a camera I am a photographer." What I realized was, that most folks working in this media, creation of the final image is almost a random walk where they think they will recognize something good when they see it but have little idea where they are going.

While this may be one approach, I have always thought of photography as a backward medium in that we should have some concept of what the image should look like and then use whatever tools are at our disposal and mastery to achieve that image. I recognize that we can see something working that may divert ourselves from our original thought path but ultimately I think we should have a concept in mind before we start on an image.

Chuck Close said something to the effect that photography is the easiest medium to master but the most difficult to express your vision. An artist for whom I have a lot of respect had a saying that craft is the language of the arts. I actually think that craft is the tool of the arts, it is not a substitute for a lack of vision. (I'm tempted to make a snarky comment at this point about all the beautifully crafted boring pictures that are made with a view camera. I'll refrain....)

I'm more and more coming to the conclusion that we teach photography backwards. I think we should teach visual literacy before we teach how to use a camera and lenses. The basics of photography should be taught after we teach how to see, not before.
Posted by Jim Steele at 9:36 AM 2 comments: Links to this post