This is an article that every photographer and maybe every artist should read.   It's short, but pithy.
Posted by Jim Steele at 12:15 PM No comments:

Every now and then the creativity fairy visits you.  I thought someone might find interesting the evolution of one of my most surreal images

One day at the Torpedo Factory I had too much time on my hands.  I had an opportunity to shoot at the DC Court of Appeals building that was being renovated.  I was intrigued by a series of receding doorways. 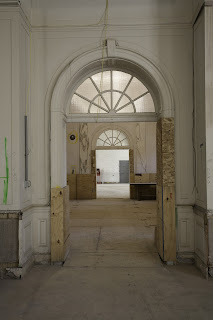 Upon opening the file, I discovered how dull, boring, and uninteresting an image can be.

At this point it became a challenge.  And, I had time on my hands.

One of the foremost photographers dealing in surrealism in Jerry Uelsmann.  I said to myself, "what would Jerry do?"  I thought the first doorway would make a good frame. 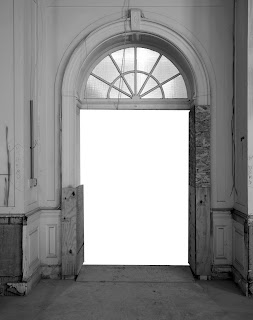 I thought Jerry might also put a boulder behind it since the first doorway provided a great frame.  To wit: 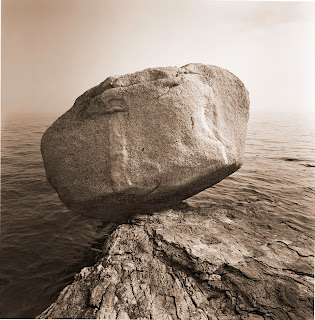 This worked pretty well but if the boulder was going to be sepia, the glass above the door had to be approximately the same color to give the illusion that the boulder was behind the door.

I then asked myself what else Jerry might do?  Stupidly, I said he'd add an eye. 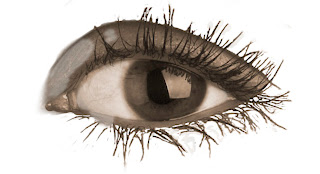 I say stupidly because isolating the eye was one of the hardest jobs I have ever done.  Trust me, if you see an eye in another of my pictures, it will probably be this one.

Never content to leave well enough alone, I noticed the cord dropping down out of the ceiling.  One of my favorite photographers is Christopher James.  Christopher had a "Red Line" series in which he introduced a red line in each of the images. So I painted the cord red as an homage to Christopher.

Several of my fellow artists at the Torpedo Factory Art Center (Susan Makara and Christine Parson) commented about Picasso's "blue" period and that the eye would look better green.

Thus I arrived at the final image seen below.  I'm not sure I deserve a lot of credit for the image.  It's been stable for several years but I consider it a work-in-progress.  As it is right now it is an homage to Jerry Uelsmann, Christopher James, Picasso, Susan Makara,.and Christine Parson. 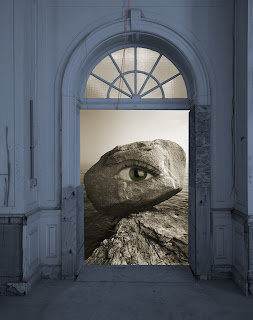 Posted by Jim Steele at 1:34 PM No comments: 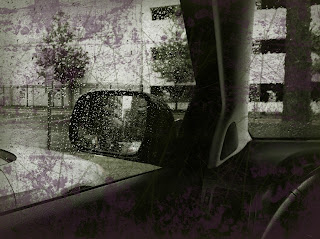 Waiting for the Rain to End, not Godot....

Here I go again.  I think I'm turning into an old curmudgeon!  Maybe I already have already and am just now recognizing it.

The above picture was taken with my iphone while waiting for the rain to stop.  It's more of a statement about how little I had to occupy my time than it says about my artistic vision!  I guess I could have named it "Homage to Samuel Becket" and let folks wonder what the hell I was talking about.

Years ago when the Diana, since replaced by the Holga camera came out, there developed a bit of a cult following.  These were cheap plastic cameras with terrible lenses, that scratched the film as it was transported through the camera, and leaked light so that flair showed up on the film.  The equipment is not the problem.  I've seen a lot of great work done with this kind of equipment.  As an example of how it should be done I would refer you to the work of my good friend Craig Sterling.  Check out his gallery "New Work."  Most of the images are done with a Holga or an iphone.

It seemed that the art world was willing to embrace the results without regard to whether or not the images were good.  Almost everyone working with a Diana/Holga was declared a "fine art" photographer and held in some sort of awe.  Most of the work was garbage and was a waste of film.

The emperor had no clothes but a lot of the folks who should have spoken up didn't.

I see a version of this happening today with many applications for smart phones.  If it's fuzzy, out-of-focus, off-color, with ragged edges it must be fine art. Maybe the problem is not with the application but rather what most people think of when they think of "fine art" photography.

Mike and Doug Starn proved years ago that a photographic image didn't have to be sharp and pristine to be great art.  Their work often looked like it was held together with chewing gum and bailing wire.  However, they had great vision that was expressed through appropriate craft.  Their works are amazing and need to be experienced "in-the-flesh" so to speak.  No publication does them justice.

Once again we have craft, a result of the application, substituting for vision.
Posted by Jim Steele at 4:07 PM No comments: